Workplace violence has been on the rise in hospital systems nationwide, with the greatest percentage of victims being nurses –the hospital’s largest workforce base.

CMCB has seen sharp spikes in attacks over the past year, with the total number of assaults tripling. In an added effort to protect employees, staff in high risk areas will soon have an extra layer of protection: The button on their tracer tags will be activated in a new alert system.

The safety button system will be implemented by the end of the year and could not be possible without generous support from the Skaggs Foundation. The Foundation awarded CMCB a grant of more than $132,000 to bring the technology to Branson– a decision the Foundation’s board says was an easy call.

Cox Branson’s safety system will have two components. Here’s how they work: Approximately 300-400 staff working in the ER and inpatient hospital rooms will have the personal panic button on their badge. If they are in distress, they push the button which then activates the personal tracing system. Security is immediately notified and a pop-up alert on hospital computers shows the employee’s exact location, using our wireless system throughout the hospital. If the employee moves after pushing the button, the alert will update their new location.

The distress calls are also displayed in the hospital’s Responder 5 nurse call system. For example, if a staff member is being assaulted inside a room, the system will activate a custom light pattern being lit outside the room. All of those calls will ring with a custom tone at designated nurse call consoles.

Alan Butler, CoxHealth’s system director of Public Safety and Security, calls the buttons a critical tool to curb assaults on our team.

“When Public Safety response is critical and it’s not possible to get to a phone, person panic buttons fill a critical void,” he says. “Personal Panic Buttons (PPBs) are one more tool in the battle to keep our staff safe and further demonstrate this organization’s commitment to maintaining a safe work and care environment.”

Cox South trialed the use of PPBs in 2020 after the idea was proposed at the Innovation Accelerator. The technology has proven to be solid and efficient in engaging swift responses to calls in duress.

According to hospital data, CMCB workplace violence increased significantly from 2019 to 2020, with the pandemic greatly compounding the issue. Total events increased 94 to 162; total assaults 40 to 123; total injuries 17 to 78; and assaults leading to injury increased from 42.5% to 63%.

Those numbers are of great concern to Angie Smith, our CMCB Patient Safety Facilitator, who wants staff to understand that dealing with violence is NOT just “part of the job.”

“A lot of WPV events are underreported as staff don’t feel like they would be supported or don’t feel like they would be able to do anything about it,” Smith says. “The biggest part of being in health care now is not only being able to give excellent care to your patient you’ve been assigned and to make them feel safe, but to also feel safe yourself as their primary caregiver.”

“I look at our WPV numbers daily, and I am hoping along with our already great team of Security personnel, this will just be an added benefit for our staff to help ensure their safety while being the best for those who need them,” she says.

Lynne Yaggy, VP of Clinical Services and CNO, applauds the Skaggs Foundation for being a constant support to hospital initiatives.

“We cannot thank them enough for being here when we need them,” Yaggy says. “When we asked for help to bring this technology to Branson, they didn’t hesitate. Their commitment to this community and our hospital team is appreciated more than we could ever say. We’re very, very grateful.”

Cox Branson receives grant for Personal Panic Buttons (PPBs) Workplace violence has been on the rise in hospital systems nationwide, with the greatest percentage of 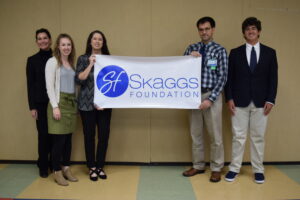 Skaggs Foundation has made another investment in the future of local healthcare – this time to the tune of $7,250. The foundation recently awarded 13